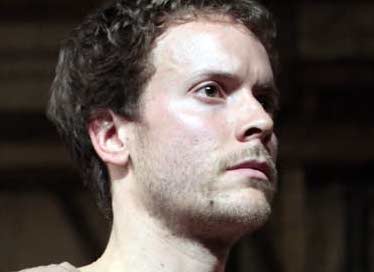 Pablo Esbert Lilienfeld was born in Madrid. He obtained a high degree in audiovisual communication from the University of Complutense, and a diploma in contemporary dance from the Real Conservatorio Profesional de Danza. He also studied some music in the Escuela de Música Creativa in Madrid. At the present moment he combines the dancing and acting for companies in Europe with his creative work, audiovisual and for the stage. The musical alter-ego of Pablo is at the moment being created and remains in complete secret so far. He has performed in Madrid for little projects with choreographers such as Pedro Berdayes and Carmen Werner. He performed in Kyrie, el nuevo jóven europeo from Pepe Mora, with Nacho Vigalondo, a theater piece for which he also wrote the music. This piece is based on the comic by Miguel Angel Martín, and in it Pablo wore tight plastics to play Rubber, an insect from the XXI century who plays in a noise band and ends up forming a sect.?For ALIAS, in Geneva, he played the doctor in Frankenstein!, large-format contemporary dance for the Grand Theatre of Geneva.?Lately this years he collaborates with Philippe Saire in Lausanne. He has taken part in Il faut que je m’absente and Lonesome Cowboys, pieces with which he continues to tour all around the world.?Playing the guatemalan transexual murdered in 2005 Paulina Marrot, Pablo appears in the dance-theater piece Silenciados, from Sudhum company. This piece tells the history of five persons who were murdered because of their sexual orientation. It has been touring all around the world from 2007. In 2010 it was presented in the Festival de Teatro Iberoamericano of Bogota. On his creative side, he made in 2005 Can’t keep all this laughter to myself anymore. This very personal recreation of the eighties received two second prices in ADAE (Alcobendas, Madrid) and in DanSalt (Gerona) and a residence at La Caldera in Barcelona from the XIX Certamen de Coreográfico in Madrid. During his time in residence, he created Ojos en glosa his first dance-video, screened at the XX Certamen Coreográfico of Madrid, in Teatro Fernando de Rojas and in the IDN festival, Barcelona. In 2009, he received a bursary from the La Casa Encendida in Madrid for his new creation EDIT, which will be premiered in October 2010 in this same center. Pablo develops at the same time his musical creativity composing almost all the music for his pieces and videos and working as a musician for other artist’s creations.