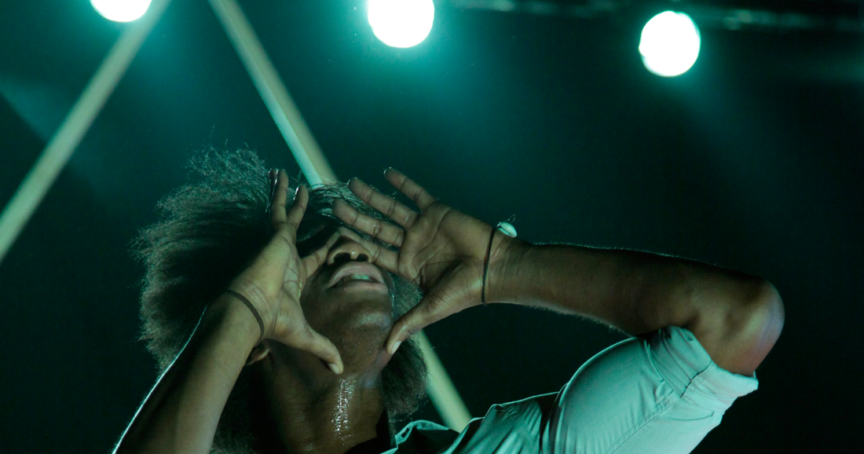 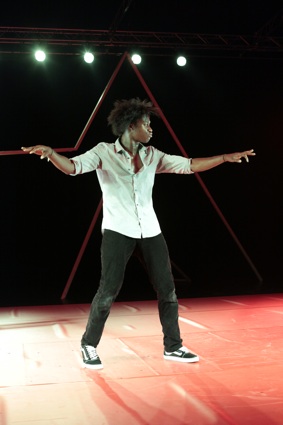 Maldoror is considered one of the ultimate literary incarnations of evil. The book was published in 1874 as the sole work of French author Lautréamont. According to the Nobel laureate for literature Maurice Maeterlinck, he is “a black, shattered archangel of inexpressible beauty”, anticipating numerous elements of surrealism

In “Maldoror – Amped”, Christoph Winkler sets out with U-Gin Boateng, one of the most prominent Krump and New Style dancers in Germany, to investigate at what points this fictional character coincides with typical characters in Afro-American hip hop culture.

A Christoph Winkler production. Funded by the City of Berlin - Department for Cultural Affairs. Supported by Phas

[...] the artist Eugene Boateng brings a successful crossover between Maldoror and hip hop to the stage [...]. The young artist’s performance was far from sterile. Right from the beginning, as he gradually emerges from the darkness, his physical presence is enormous. The audience is presented with a full hour of blood, sweat and tears. A unique combination of dance, theater and hip hop.- der Freitag

"I didn't want to serve the viewer's expectations. It's not a show in that sense and it was much more important to me to show how U-gin works with himself and his body." And he did. It's fascinating how he slowly gets into the silence surrounding him, surprisingly begins to sing and, during the piece, changes his emotional state dozens of times, abruptly switching from elated to vicious. A tough subject for the God-believing dancer to embody the "evil". "During rehearsals I often said to myself, I can't do this. There was a scene in the "Songs" where God lies drunk in the corner and is smeared with excrement. Then I asked myself, what am I actually doing here? I am the incarnation of evil." Yes, it is an "evil conversation" that Christoph Winkler brings to the stage here. U-Gin carries evil within himself and every now and then it flashes out of the sociable camouflage, snarling, but Christoph Winkler never lets the evil break out. - Dance Unity - International Urban Dance Community

The title "Böse Körper" ("Evil Bodies") already implies the kind of uncertainty the Berlin choreographer likes to use to link philosophical discourse and dance. Because actually a body cannot be evil, the category of morality only takes effect when it comes to human actions[…]

The third part, "Maldoror Amped", is also about playing with fictions of evil, as they appeared in literature, for example in the "Songs of Maldoror" in the 19th century and today in the lyrics of gangsta rappers. The performance by the young dancer U-Gin Boateng quotes both. He is alone on stage, surrounded by spotlights. Even music supports him only in short stretches, most of the time he evokes black entertainment culture with his body and voice alone, from the sex machine of James Brown to Michael Jackson and the young rapper Tyler the Creator, whose fantasies of violence, sex and murder recall Lautréamont's images of evil. The lyrics and the seductive gestures with which these stories are served up are split and alienated, looped and sampled. For this reason alone, everything one sees seems to have already flowed through a gigantic media apparatus and image machine that magnifies every element ever further and increases it into the monstrous. Rarely does one see a dancer sweat as much as U-Gin Boateng, rarely does one perceive dance as a struggle of a body as much as in this impressive solo. Boateng grew up in Düsseldorf, played theatre there and danced in the hip hop and krump scene, winning prizes. He is practiced in their battles, everything is set to power, a very precise muscle play, but the battles are often only over a short distance. Being present in the spotlight for 60 minutes was an enormous challenge for him, and from this physical effort, a struggle to hold out, the solo gains an unusual physical presence. One watches the POC dancer undergo powerful transformations. He suddenly falls out of the cool and attractive poses of the entertainers and mutates into an animal, a monkey or an octopus, until the animalistic in turn into completely abstract movements of a beauty of their own. The symbolically charged body image alternates with movements that only follow their own logic. taz. KATRIN BETTINA MÜLLER