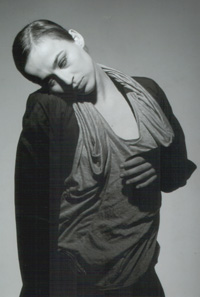 Anna-Luise Recke, born 1982 in Berlin, studied contemporary dance at the Palucca Schule Dresden (1994-2000), and at the Rotterdamse Dance Academy where she received her diploma as stage dancer in 2002. In 2001 she started working with the company Conny Janssen danst in the Netherlands and with Alexandra Mijers in Belgium. Since 2003 she has been living in Berlin again where she has worked freelance with Christoph Winkler, Sommer Ulrickson, Chris Kondek, Caroline Meyer-Picard, Maya Lipsker, Stereo Gong Vital, Huber&Christen, Anne Retzlaff, Hyoung Min Kim, Anne Hirth and Hanna Hegenscheidt.

In 2003 and 2004 she was mentioned in the Ballet Dance Yearbook as a ‘remarkable young dancer’. In 2005 she received a scholarship from the Berlin Senate to study Klein technique with Susann Klein in New York. In 2006 she was a scholarship holder at the Künstlerhaus Lukas in Ahrenshoop. Her work as a freelance dancer took her to South America, Africa, Korea and various cities in Europe. October 2007 birth of a son. 2008/2009 Kundaliniyoga teacher training. Since 2009 she teaches creative children’s dance and modern dance in the Dock 11 Studios, as well as for TanzZeit.